The revival of Aftenposten logo

CASE STUDY: Aftenposten is Norway’s largest daily quality newspaper with over 1,2 million readers in print and in digital ap.no . The overall goal with the redesign project, launched in 2018, that my studio did, was to keep a connection to the history, make it work in the present and prepare it for the future. The loyal readership of Aftenposten should feel that the exclusive relationship is maintained but lifted up to higher level of experience.

WHY? To safeguard the heritage brand

After a couple of decades of galloping digitization, restructuring and modernization needs in the media industry, it is Aftenposten’s style, tradition and identity that must be clarified.

Aftenposten is the oldest newspaper in Norway, a Scandinavian newspaper icon, founded in 1860, in Oslo. To show it’s history does not keep it from being modern, in all journalism and publishing, it makes it more trustworthy.

I made a discovery when I was researching old versions of the Aftenposten logo.
— The original logo was softer. Airier, more graceful in the curves. And more like old handwriting, as the idea was probably originally.

So I suggested to redraw the Aftenposten logotype and title-piece and to make the title-piece more prominent again. I showed that if the full name »Aftenposten« returns in its full width at the top of the page or header it creates a clearer branding in both print and digital.

Ultimately this was a way for Aftenposten to safeguard their fine and original heritage brand. 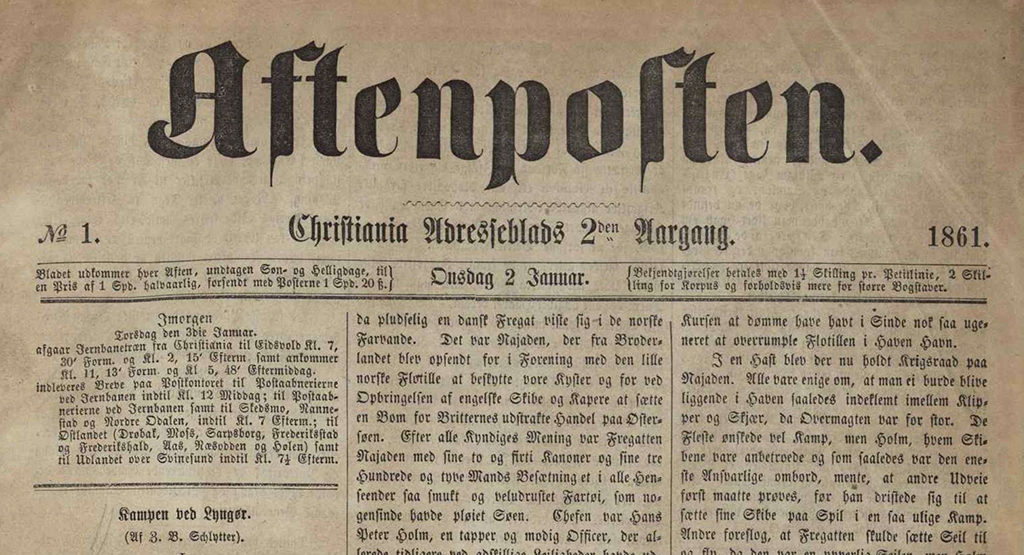 The original title piece from 1862.

The perfect man for the job description was the british typeface designer Paul Barnes, Commercial Type, he described the redraw challenge like this:

»The original Aftenposten is expressive and distinctive, capture the qualities of fraktur, black letters and the human penmanship«.

On a hot and beautiful summer day in June, 2018, Editor -in- Chief: Espen Egil Hansen and I, together with Aftenpostens photographer: Paal Audestad, went on a logo trip to London to meet with the typeface designer Paul Barnes.

Hansen had brought a surprise package with him for Paul to unpack; the very first book with fronts of Aftenposten from the archive in Norway. Together we discussed Aftenposten’s ’A’ and rare ’s’ with the expert Paul Barnes. Hansen asked Barnes: What is your personal opinion about the long, weird ’s’?
— It is more special than most ’s’, and mirrors the ’f’ in the logo. People accept it without caring. But if we had started with blank sheets today, no one would have written it that way, says Barnes. 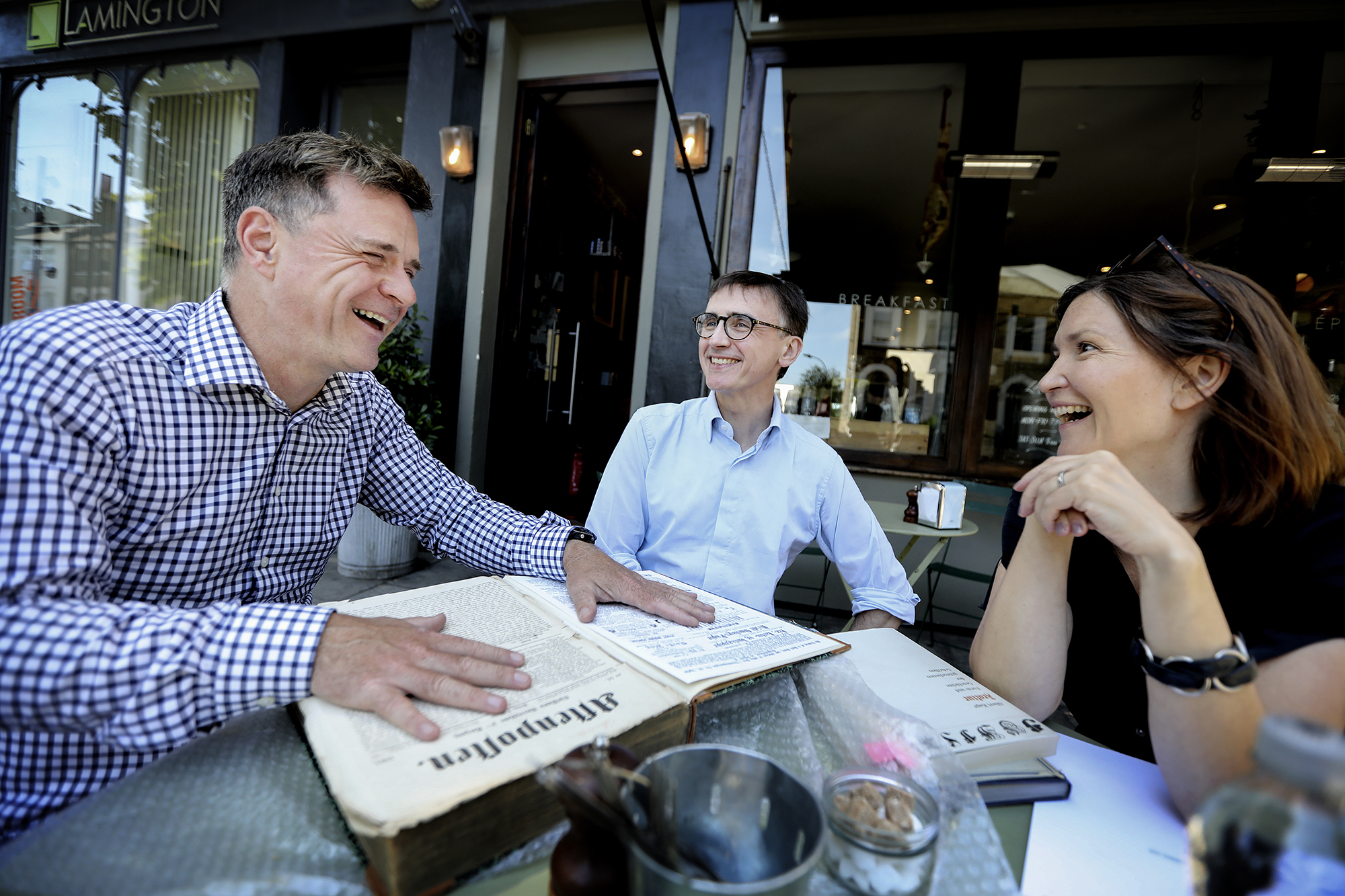 THE RESEARCH: Black letters and Fraktur

The typographic research on the Aftenposten title-piece, took us back to the era of mid 1800- century, where a lot of renaissance-inspired newspapers was founded. The typeface of fashion, back then was the black letters and fraktur. The famous quality newspapers as The New York Times, Frankfurter Allgemeine, Herald Tribune, all used type from fraktur style.

— The black letters was often chosen for newspapers to make them look trustworthy and established, says Paul Barnes.

The seemingly unchanging logo with the kind swoosh ‘A’ and the strange, vertical s was not as unchanged as many might think.
In my research I found out that the Aftenposten newspaper title-piece had actually changed shape a total of 19 times since its inception in 1860 — and that it was basically more beautiful before.

In the previous design, the logo had for some years now been a large and recognisable ‘A’ combined with the newspaper name inside a circle on the front of the paper edition. The circle has from day to day moved around the page, from the left to the right corner and back, sometimes it has also made trips down the page. 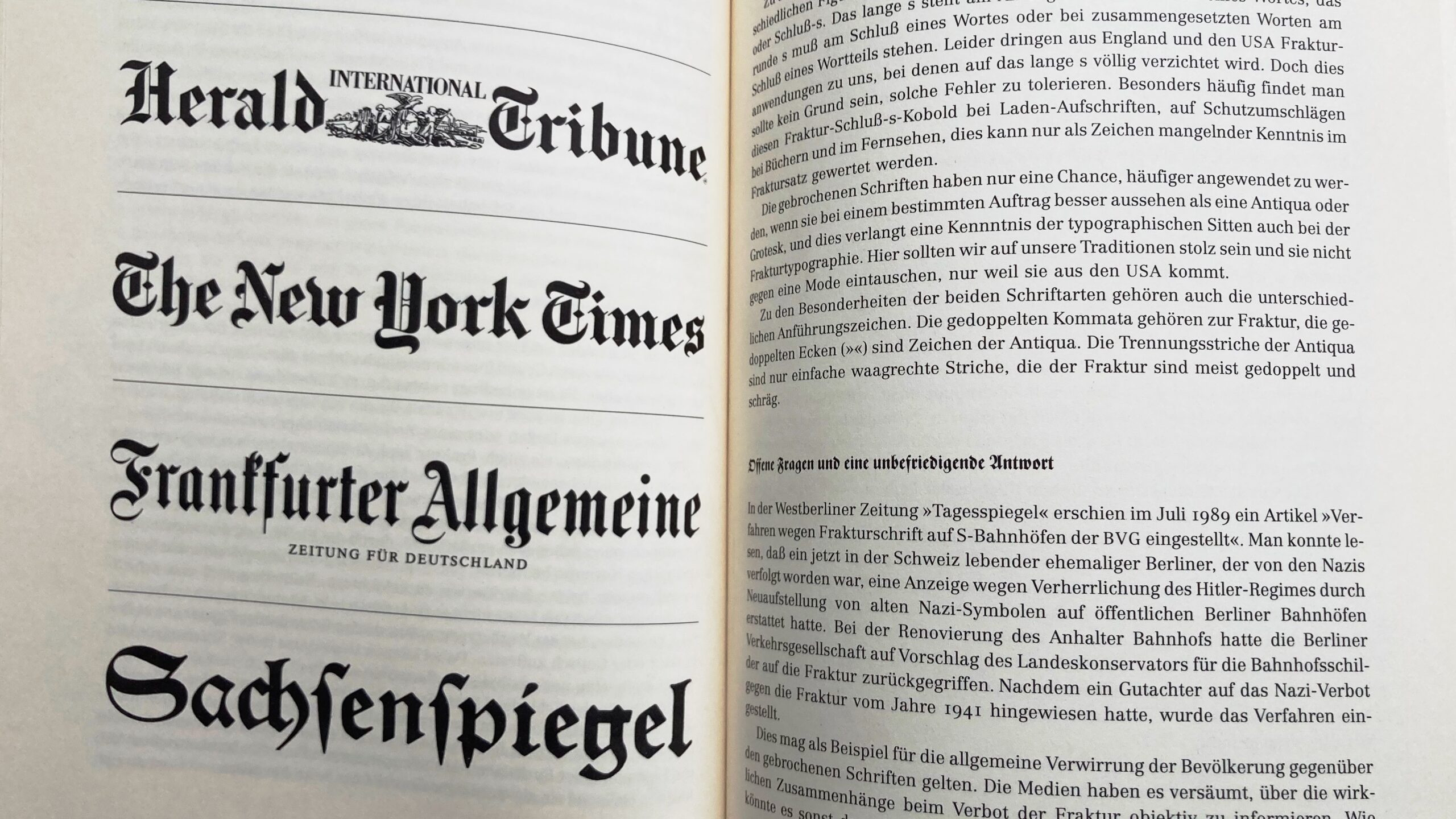 THE PROCESS: Do you see the difference?

Over the phone and in e-mails we discussed what way the Aftenposten could be developed and improved. It was no news for Paul to draw fraktur, he has also drawn the fine Daily Telegraph’s title piece.

Paul did 16 sketches of different directions to show ways that Aftenposten could be looking like. It was very exciting to follow. Some of Barnes sketches proved more relevant and convincing than others. I think although it could have moved in any direction it was also clear to us we were moving in the direction of a revival of the original Aftenposten title-piece. We picked a few sketches that seemed most right for the purpose, to show for Aftenposten team, how we rescued the heritage brand and yet improved its form for the future.

— Can you see the difference between the Aftenposten logo before and after?

The new redraw of Aftenposten logo is slimmer and more beautiful, ‘A’  is slimmed down, the tall, old ’s’ is kept. Hopefully the grace is back and readers can sense Aftenposten kept its history and modernised for today’s need.

It was a very open process, where the editor: Espen Egil Hansen, and I talked a lot, he wanted to know my opinion and he invited me to present the new logo for the editorial leadership at Aftenposten in the very nice setting: his summerhouse at Elsehoved, Fyn, Denmark.

It was an extensive work that Paul Barnes did, when we had chosen what direction we wanted he designed various variations within that direction, to test what weight and height that best suited the new Aftenposten title-piece and logotype.

The Aftenposten title-pice and logo before

The new Aftenposten title-piece and logo that is more airy

A version with a new ’s’ that was evaluated and rejected in the process.

The new logotypes are designed to work for both Aftenposten print and digital. When it comes to logos, one size doesn’t always fit all. It is a huge difference in size and appearance of the product in a mobile phone and a newspaper by technology: a screen is a pixelated picture of type and newspapers is a printed version but also in size. To keep it simple I suggested Barnes to create three sizes to fit for the different purposes: mobile (S), desktop (M) and print (L). To streamline the production I also suggested to collect the logos into a font named: Aftenposten.

THE SHORT CUT: Valuable  ’A’ for the smallest screen and to make the magazine cover fly

The initial Aftenposten ’A’ is a very strong linguistic and pictorial abbreviation.  The  ‘A’ has been an appreciated part of Aftenpostens visual identity since the first Sunday magazine supplement, carrying the abbreviation, was first published in the thirties. The initial letter ‘A’ creates a form that makes clear, beautiful magazine covers with impact. Last but not least the ’A’ it fits incredible well as symbol logo on the app icons. It is incredible important today, that the readers are able to identify the product clearly, among the other apps on small mobile devices. 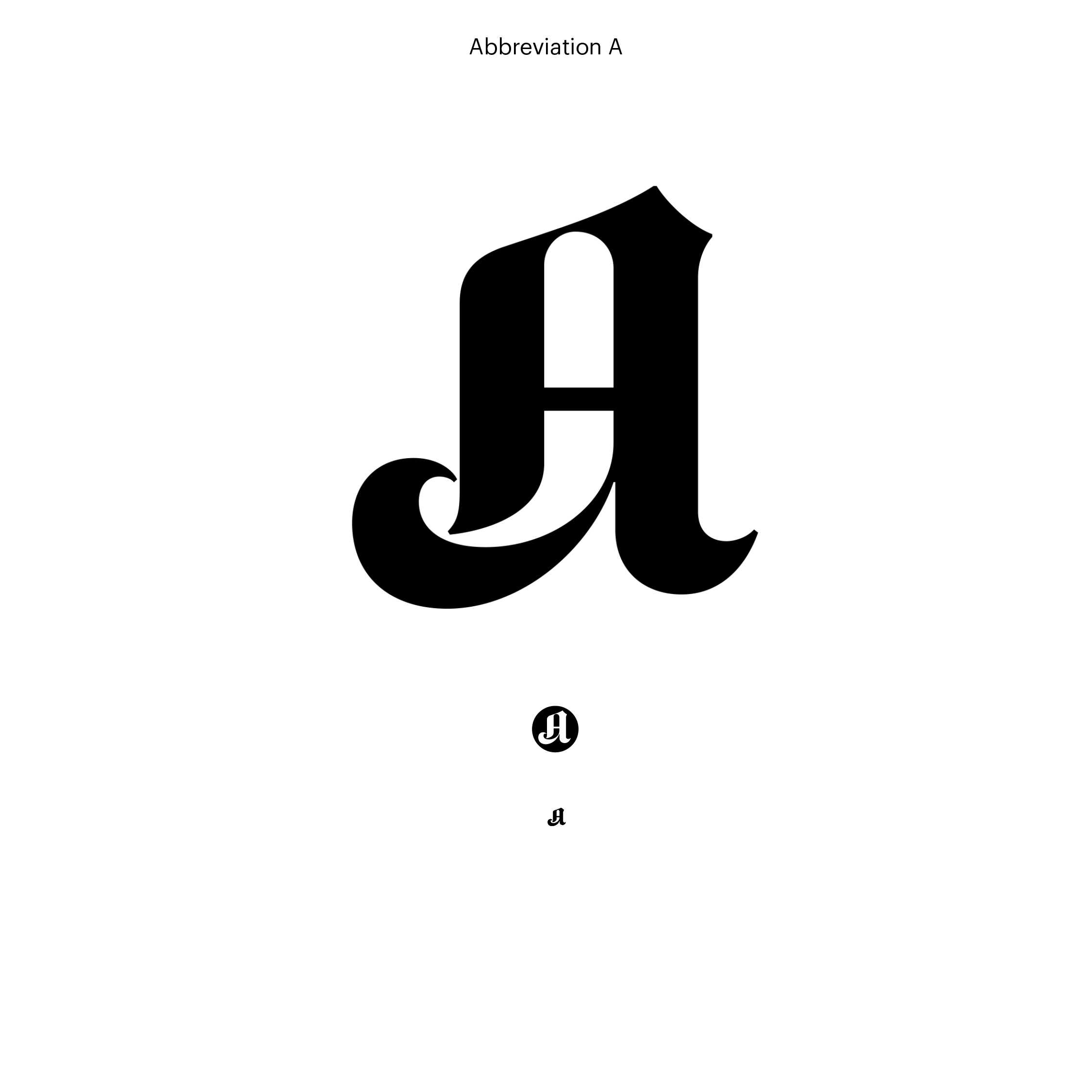 THE REDESIGN: Watch the video

Read the story on the print redesign project here: