A reform project of 72 newspapers in Finland

In december 2020, Anna Thurfjell design studio was chosen to work with the reform of all Mediatalo Keskisuomalainen digital platforms and printed newspapers to create a new design, look & feel, to be launched in 2022. — The reform is unique in Finnish media history. In fact during the year the group has grown, and now it is 78, nearly 80 newspapers.

In the largest reform project my studio worked with; the project scope is; To reform all Mediatalo Keskisuomalainen’s news products; over 60 websites and nearly 80 newspapers into one design system. Digital launch, first version, is 11th of May, 2022 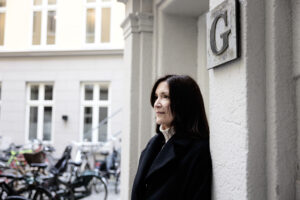 This morning’s newspaper looks very different than it did before Easter. The design changed at the same time in all Mediatalo Keskisuomalainen newspapers and the newspaper Karjalainen.

Behind the new look is Swedish designer Anna Thurfjell, for whom a joint project of almost 80 newspapers was an interesting challenge.

— It was a big piece to chew because the new design had to be flexible and work in newspapers of different sizes, Thurfjell says.

”The main task of the reform was to share stories faster and better. It required a new kind of thinking, an entirely new building rather than a mere renovation”

The design reform is the largest in Finland.

— Even globally, it is uncommon for a media group to have a single look for all products. This is a very bold idea, Thurfjell says.

She also considers it rare that the reform is targeted at local news media.

— For a long time, only the biggest media have invested in quality, but the popularity of local news has grown around the world. It will be interesting to see how this reform will improve the media environment in Finland, as such many newspapers will improve their quality.

Thurfjell designed a distinctive and recognisable design with even better readability and usability.

The new look looks and feels open. The result is more visual than before.

White space is an important part of all design, according to Thurfjell. It is important with white clear space in a newspaper layout.

— Headings and other elements of the page have a clearer position, they are more prominent and more visible, Thurfjell explains.

Thurfjell’s style is to reinforce the DNA of graphic and visual design in all products. She does so with a clear and distinctive choice of typefaces as well as a clear visual presentation.

— In digital platforms in particular, white space is important for the reading experience. If too much happens around the text, the reader may be upset or frustrated. Then we go to read another place. 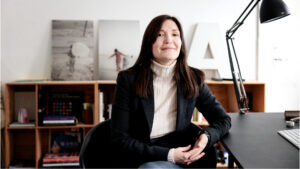 The new news design designed by Thurfjell is easier to read than ever before, as typefaces have changed.

According to Thurfjell, a typeface for a graphic designer is the engine of an entire project that provides ideas and drives design forward. In this reform, the Finnish language was different, which not all typefaces work with.

— There are very long words in Finnish, which was challenging. The language is also harmonious and rhythmic. It was very interesting to do research to find a typeface that could improve readability, Thurfjell says.

— I noticed that the old typefaces in the four main newspapers in the group, didn’t really help the reading experience. Sometimes a typeface has been fashionable at a time, but that’s not enough.

Thurfjell tested several different fonts. The letters had to work in print and on the screen, from the body text to the title.

— Type should have a good rhythm like music. While readability is important, the typeface in the newspaper must also have character.

According to Thurfjell, the serif typefaces commonly used in newspapers create a classic news style and are easier to read both in print and on screen.

Sans serif fonts, on the other hand, are straightforward and neutral, meaning they are well-suited to factual texts, for example.

As a basis for the design, Thurfjell researched the old design of the major newspapers in the reform and found much to develop.

— The design lacked effectiveness and a clear structure. Readability and usability needed to be improved. The visuals were not as inviting as they are now.

Thurfjell, who lives in Denmark, sought inspiration for the newspaper’s history, Finnish language, and culture, as well as the Finnish designers Alvar Aalto, Eero Saarinen, Armi Ratia and Marimekko’s designers.

— The Finnish style is distinctive, equal, and natural. There are clear references to nature. The main colour of the new layout of the magazines is blue, because Finland is the land of thousands of lakes.

The first step in the design reform is the change in print, followed by the renewal of digital platforms. You can already get a taste of it from the newspaper design because the structures, colour codes and typefaces are the same in print and digital.

One of the main ideas of the whole design is to simplify and streamline the structures of the stories, i.e. the same elements are repeated in print and online, Thurfjell says.

The starting point for the reform was the emphasis on digitalisation. The biggest change online and mobile is that the structure is clearer than before.

Especially on the front page of the websites, it will be easy for the reader to see in the future what the order of importance of the stories has and what department the story is from.

Movement between a computer and a mobile phone, for example, is seamless. The design is more recognisable than it is now both online and in print, Thurfjell says.

The new look is Nordic and clear. According to Thurfjell, the Nordic media has a good reputation for the speed and usability of digital platforms. But there is still room for improvement.

— Finland is one of the most digital countries in the world. It does not matter whether it is the New York Times or a local newspaper in Finland. Readers expect a certain level of digital visual storytelling nowadays.

According to Thurfjell, the purpose of the reform was to create a better reading and user experience.

Readers still always have a moment to get used to the changes in appearance. Thurfjell noticed this when she was a creative director at Svenska Dagbladet (2003-2013), before founding her own design studio, in 2013.

Readers call the newsroom when, for example, the typefaces changes. Then the publication no longer feels like the same familiar newspaper on the breakfast table. In general, readers like news redesign when they are relevant. They need to get used to and rebuild a relationship with a renewed newspaper.

The implementation of the Newspaper design reform has been the responsibility of a large in-house team, with whom Anna Thurfjell, who was the main designer, worked closely together.

Cooperation is the only way to change the newspaper. In this project, everything worked efficiently, and I learned a lot myself. Thurfjell got ‘free hands’ to develop the design for the new look.

— The freedom of the designer depends on the courage and ambition of the customer. I was lucky to get a call from this brave Finnish media company.

The serif typeface is called Majrit;

”Majrit is a very powerful newspaper typeface that I made for El País back in 2007. In 2017 I expand it and optimised it for the web. Majrit, was the name of a nourish fortification that existed in the place where the city of Madrid is today”

”Caslon Doric is a modern sans serif which is both utilitarian and characterful. It was designed by Paul Barnes of the internationally renowned foundry Commercial Type being based on English grotesques from the late nineteenth century, but updating them for todays needs”

All 600 employees in the group has a role in making this project happen. This is the people I worked with all through the print project who had special roles and responsibilities.
— Thank you for a great project:
Terhi Nevalainen, editor and project team manager
Seija Finne-Saarento, the designer in-house leading design and visual team
Print building team:
Aki Jørgensen, Neo system and layout developer
Juha Hirvaskero, Layout producer